(Gnaddenhutten, OH)  Startling new details have emerged on the recent escape of Martha Stewart from the federal prison in Alderson, West Virginia.  It has been learned that the rabidly militaristic and anti-Bush sect of Gnaddenhutten Amish may be the masterminds behind Stewart’s January 1st escape. 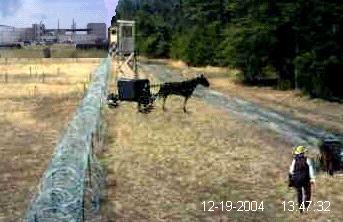 Sharing Stewart’s strong anti-George W. Bush sentiments, the Gnaddenhutten Amish are strong supporters of Hillary Rodham Clinton, electing her Tallow Queen in 2001. The group are also loyal fans of Stewart herself, incorporating many of her soap and potpourri making techniques into their own cottage crafts.

Compounding the evidence is a tourist photograph, taken December 27 in nearby Steubenville, Ohio, just across the river from West Virginia. Mr. and Mrs. J. Gillespie of Bolivar snapped this picture of a woman, with strong resemblance to Stewart, riding in the back of an Amish buggy heading out of town into the Ohio hinterland. Steubenville authorities were unavailable for comment on this story.
Home
Read More from the Archive

© January 2005 The Snooze. All rights reserved.