Newsbits from Around the World...

A recent pole among American Citizens shows approval of Congress has skyrocketed from .08% to 89%. Sources reveal this change of heart is because the only body parts Congress will be touching this year will be shoulder to shoulder (and will not include any interns). 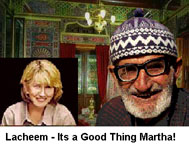 Copies of Martha Stewart's "Living" Magazine have been translated into Arabic and air-dropped into Afghanistan. A CIA file confirms that terrorists have long suffered from "what to do syndrome." Studies show that people with too much time on their hands and not much to do get into mischief. Snooze Reporter, Justin Time, went out to the front lines of the Taliban to see the effects of this recent war on terrorism.

Justin: Well, I'd given them some money and wheat so they allowed me into their caves. I was expecting it to be dank and stinky, but it smelled heavenly. Then I notices two men dipping candles and another drying potpourri. My guide, Musafah, lead me down long corridors and windy paths. All along the darkened hallways I noticed delightful handmade mobiles hung from the ceiling, made with stencils and construction paper. Upon entering the vestibule of the leaders quarters, I spoke with an Arab sitting on the floor sorting marbles into glass jars. He told me, "before LIVING we didn't know what to do with our marbles. We were always losing them. Now I have learned just how to sort them by color into these clear glass jars. There's red, here's green, and just look how they shine in the light!" I also notices a sumptuous throw over a rock.

When the leaders came out to welcome me into their quarters, I noticed that even the elder members had lined their robes with a plaid taffeta print, which you could see just a hint of when they walked. All of their sit-upons were made out of recycled parachute fabric and piped in gingham with the corners tied in bows. When I complemented the men on their stylish look, one blushed. He told, "I never knew how nice it felt to sit in taffeta."

"The air drops have been successful," President Bush said today as he held up a decoupage plate of Americans and Arabs dancing and laughing, brothers at last. "Try a cupcake," said Adi Behmerhaishumaruabasmafhati as he passed a cupcake to Bush. It was his first try at pink frosted flowers and delightful yellow chicks with orange beaks. They all laughed, ate cupcakes and agreed that now we can all get back to doing what we enjoy most: LIVING.